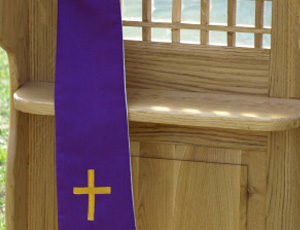 No words can describe what only a Catholic believer can understand: what it means to be absolutely certain on revealed faith that I, a sinner, am once more in the friendship of God because I have received absolution in the sacrament of Confession. This peace of soul is priceless. It is also irreplaceable. Only a person who is certain that his sins are forgiven can have true peace of soul. God became man to give us this precious gift of peace; and the sacrament He instituted on Easter Sunday night, to give us repentant sinners this foretaste of heaven here on earth.

How does this sacrament provide such peace of soul as nothing else on earth can give. Perhaps it is because the single most basic and universal source for worry or anxiety is the sense of guilt that, as sinners, we all naturally experience.

Jesus Christ instituted the sacrament of confession on Easter Sunday night. As St John describes the event, “the doors were closed in the room where the disciples were for fear of the Jews. Jesus came and stood among them. He said to them “Peace be with you,” and showed them His hands and His side. The disciples were filled with joy when they saw the Lord. And He said to them again, “Peace be with you. As the Father sent me, so I am sending you.” After saying this, He breathed on them and said, “Receive the Holy Spirit. For those whose sins you forgive, they are forgiven. For those whose sins you retain, they are retained” (John 20:19-23).

As the Catholic Church explains these words, Christ gave the Apostles and their successors the right to forgive sins if they so judge the penitent (or the person making the confession) worthy and the corresponding right to retain sins or refrain from absolving if the sinner is not sincerely repentant. The implications of this power of judging whether to absolve or not are at the heart of the sacrament of Penance. By these words, Christ indicated that before receiving absolution, the sinner must disclose his sins. He must confess what he did wrong. This means that auricular (or audible) confession, where the penitent speaks his sins and the priest hears his sins, is of divine origin. The Church did not invent the confession of sins. It is a divine law from which no one on earth has the right to dispense. Auricular (or audible) confession is part of divine revelation. It is an unchangeable article of the Catholic faith.

The Sacrament of reconciliation is a divine means of keeping alive in our hearts and in our communities, an awareness of sin. By being always aware of sin, of its lasting tragedy, we can actually open ourselves up more to the workings of Jesus and the Holy Spirit. The following extract is taken from Pope John Paul II’s address to the Bishops of the Episcopal Conference of the United States, October 5, 1979.

The Spirit of God wants nothing more than for us to pay attention to Him. Pay Him the courtesy, if you will, of recognizing that He is within us. The Spirit of God wants us to thank Him for all the good things He has given us. He wants us to keep asking Him. That is why He keeps creating problems. Those are divine signals. Did you know that? They are divine shouts. “Listen to me. Thanks. Thanks for at least looking at me. And except for the pain of the sorrow or the trial or the temptation, knowing you, you would not even bother thinking of me. Thanks! Now that you are awake, listen!” So we rub our eyes and say, “Yes, Lord.”

But mainly the Holy Spirit wants us to be submissive to His will whether this be obedience to His commands when He tells us, “Do this” or “Do not do that,” or when He gently invites us to do something more than we have to under penalty of sin, when He just whispers, “Would you mind doing this?” or “Would you mind avoiding that? Not because you have to, but because I would like you to show that you love me.” All of this, and far more than human speech can describe, is available to us, so the Church of God tells us, by our frequent and reverent reception of the Sacrament of Christ’s Peace.

The Sacrament of Reconciliation is available at St Peter’s at the following times:

Saturday: Immediately following the 10.30am Mass and at the Parish Office by request