“The Medal” in the modern world

The Feast of Our Lady of the Miraculous Medal. 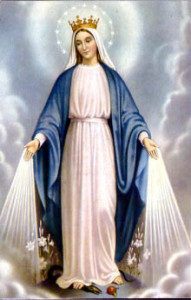 It would be easy to dismiss the Miraculous Medal and its novena as a relic of a way of being Church that is over, and to be of the opinion that this way of expressing devotion to Our Lady is, at best, as irrelevant as gas lights and the horse drawn tram. On some levels, I agree with the the opinions, the images that we use to promote this devotion are, to my taste at least, hopelessly sentimental, and remind me of the cloyingly sweet paintings of St. Therese which put me off her for years, until I discovered the steel displayed in her photographs. The novena prayers themselves, have a Victorian, florid quality which requires unpacking for an audience in the more direct age of Facebook and Twitter. Further, for an Irish devotee, the emphasis in the prayers on virginal purity, conjures up a too easily risible caricature of the repressed sexuality from which we have been “liberated” so as to “enjoy” the happy, complication-free alternative. Finally St. Catherine herself, if seen only as a pious novice given to visions, seems an unlikely role model for modern women of faith in an age which no longer channels such women towards the either/or choices of religious life or the domestic hearth.

Why then, not let it go, gently lay it aside along with mantillas and petticoats, and allow us to find new ways of honouring the Mother of God more suited to the age? Only the eccentric would wear a herring bone corset, or refuse to venture out of doors without gloves and a chaperone, (even more bizarrely so if he is a man. Think of the “Little Britain” comic character who insists “I am a Lady”). Is there no more contemporary way for me to express my faith in the 21st Century? Must we hold onto a 19th century devotion and one so apparently out of touch with the age we live in? Fashions change, even if faith does not, why not let this one go, along with Benediction and Sodalities, as an expression of its time that is past its sell by date?

There is however a nagging doubt, a sense that there is more hidden in the respectable piety of the remaining “Medelers” than meets the eye. Two advocates come to mind, men of caliber and heroic virtue who promoted the devotion: Maximilian Kolbe and Frank Duff. Neither were likely to carry smelling salts against an attack of the vapours, and in their different ways, lived the Faith to the full, one of them even to the extraordinary extent of, in horrific circumstances, offering his life that another might live. If a devotion to Our Lady of the Miraculous Medal played any part in them growing into a deep and mature faith such as they had, then to dismiss it as a fad is a lazy presumption. Also, Catherine Labore became a Saint, not because of the bourgeois intensity of her youthful devotion, much less because she was the recipient of visions, but rather due the life she lived subsequently. She proved herself no wilting flower; stubbornly insisting of what she held to be true about the medal when priests were trying for “compromise” and quietly applying herself instead to the practical service of the poor when revealing herself as the recipient of the medal would have meant instant celebrity,. If a devotion to Our Lady of the Miraculous Medal could give her encouragement and the will to continue, why not me as well? 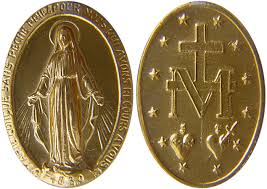 The medal itself has come to play an increased part in my prayer life, but in a very simple way. It is a commonplace, on hearing a person’s woes, to say “I will pray for you”, and, at the time, mean it, but I seldom did more than think about the person I am praying for. As a way of moving past nice thoughts I have developed the practice, when remembering one whom I have promised to pray for, of reaching for my medal, and while holding it, deliberately praying for this or that person or situation. It lasts a moment or longer depending, but elevates the remembrance from being warm feelings to being an intentional PRAYER for the person concerned. The action, forces me, if you will, to engage in prayer, that without holding the medal, would have been warm sentiments without any recourse to the Divine. This new practise is hardly mystical union, but its a start at least.

There remains the language and images, and a risk of promoting a model of the feminine that is out of touch with modern realities. In our society, the language of “virginal purity of mind and body”, and the cloying images of Our Lady that accompany the devotion are off putting to many. I certainly found it so when I, once again, began to recite the prayers with any regularity. I cannot say I have reconciled myself to the language, but, for now, have come to accept that, in a sexualised society, there remains a need to promote a holistic concept of purity which includes (yes chastity for women and men is still a virtue) , but importantly, is not confined to sex but refers to all aspects of life, a purity of intention, a single mindedness in living my faith. Although the novena prayers’ reference to purity do not necessarily equate it with sexuality, for most Irish people, purity means only one thing, and the addition of virginal, conjures up a particular vision of the feminine, whereas understanding “purity of mind and body” as purity of intention (virginal or otherwise) touches every aspect of my life, and also, lest I not be clear, applies equally to both genders. This latter understanding is much more universal and demanding than a prudish, box ticking exercise based on a narrowly understand ideal of womanly virtue. The images too, at least the ones I can find, treat the medal and Our Blessed Lady far too romantically for this age, but I have yet to find any visual treatment that is faithful to the vision and yet reflects the style of our times. I wait in hope for artists who can carry the representation of Our Lady of the Miraculous Medal into the present day.

This year I will have the opportunity to celebrate the feast in the place where the medal was revealed, the rue du Bac in Paris. In the presence of people from around the world, it is a privilege to remember an obscure and seemingly improbable vision of Our Lady to a novice which took place more than 150 years ago but by an extraordinary grace, still touches the hearts of millions today. I hope that in St. Peters in the three days of Monday, Tuesday and Wednesday, (26th, 27th and 28th Nov) you will experience personally the passionate attachment to the Son of God which inspired Frank Duff, Maximilian Kolbe and Catherine Laboure to a profound devotion to his His Mother under the title Our Lady of the Miraculous Medal.